In recent years I have been reading too much by the same authors.  For study, pleasure or for a lack of better things to do, I have plowed my way through the same classics time after time without a single dent in the cycle. However, no matter how wonderful classics are, there’s only a certain mount of times you can read ‘The Great Gatsby’ and ‘Hamlet’. So a year ago I begun a quest to read the entire catalogue of one author by the time I go to University. The chosen subject? Haruki Murakami. Known for being an author that writes for the young – his bestseller ‘Norwegian Wood’ selling a million+ copies in Japan alone and being a huge hit with students – Murakami is the complete opposite to classic. He is as contemporary as can be, his choice in themes sometimes shocking to the older and more conservative readers (I don’t know how may times Kafka got off with a girl in ‘Kafka on the Shore’). Murder, sex, war, the end of the world, these are just few of the recurring themes that crop up in Murakami novels. Four novels in and I have to admit that Murakami has passed Christopher Isherwood as my all-time favorite author, and I just can’t stop reading. Having read four books of his (and a quarter way through my fifth) I have begun to notice many recurring themes, ides and characters in his books that to me make a Murakami book unique. Naturally, you can easily play Murakami bingo and get a full board just by picking up any book randomly and scrolling your way through it. I’m not going to go through all of them, but I will mention some of the more prominent themes whose box in bingo would quickly be filled in.

Cats  –  Murakami wouldn’t be anywhere without his cats. I had a conversation with my father about this, who is also a big fan of Murakami, and we decided that the constant mention and symbolism of cats not just in Murakami’s books but also in art, anime and manga must be a Japanese thing. We have not researched it, but from our own look at it almost every character in any Murakami book or anime (and other books such as Natsume Soseki’s satirical book ‘I Am a Cat’ ) is either a cat owner, a cat lover or a cat. The biggest example of this in Murakami’s case is in ‘Kafka on the Shore’, where one of the two main characters, an old man named Nakata, can speak to cats, and even runs his own cat finding agency. His subplot comes from him having to find a cat named Goma, and with the help from other cats (who are called Mimi and Otsuka) he finds not only her but also a murderer, beginning his long journey on the run. In the two British publications of Kafka on the Shore the main cover consists of a black cat, showing the significance of cats in this book.

It’s not just Kafka that has cats; the book I am reading now (‘The Wind-Up Bird chronicle’) starts it’s plot by having the household cat go missing. I have not read much of this book yet, but according to the blurb it is the cat going missing that takes the protagonist on a spectacular journey. In ‘Dance Dance Dance’ the cat theme is not so strong, and neither is it in ‘Norwegian Wood’, but cats are round, they are mentioned and they are referred to. I guess the main point in this case is that even when cats aren’t main features in the story it seems that in the Murakami world no one has any sort of pet other than a cat (except the bad guy in Kafka on the Shore who has a dog, which just shows that cats are good and dogs are bad) and throw in a couple of Japanese traditions and a Lucky Cat here and there and you’ve got yourself a theme.

Music  –  Murakami has stated that he loves music, and that he is influenced by it over and over again.  Jay Rubin has written a book about this very topic called ‘Haruki Murakami and the Music of Words’, in which he talks about Murakami’s influences and why he uses music as a main feature in many of his books. Many Murakami fans would know that he ran a Jazz Bar with his wife for years before he gave it up to peruse writing, and that although he mentions many types of music in his books, the one he likes to talk about the most is Jazz. This is at its most noticeable in the book ‘Blind Willow Sleeping Women’ where jazz is mentioned in every other short story. As well as jazz, Murakami has a fascination with Classic, as major characters in his books listen to western composers from the 18th century all the time. In ‘Kafka on the Shore’, the easygoing lorry driver Hoshino is converted to a more conservative way of life by listening to Bach and the ever interesting Oshima has his German composers on repeat in his car. The music theme is at its best in possibly his most famous novel ‘Norwegian Wood’ the title of the book being a direct influence fro the Beatles. As well as music Murakami likes to talk about the era in which he grew up in – the 60’s – and ‘Norwegian Wood’ could possibly be his most critically acclaimed book because of this mixture of music and time period. In both this and Kafka on the Shore the characters are able to play instruments, write their own songs, and are excellent at covers. With certain authors there is often a dominant profession or talent that most of their characters hold (one example being the amount of authors scattered through Stephen King novels) and in Murakami’s case, it is certainly the musician that rules at the top.

Influence from Western Culture – Another thing that Murakami has personally stated he takes influence from is the cultures and ways of the western world. This would make sense seeing as Murakami is Japanese Child of the post-war era, where influence from America through the military and Europe through music and literature was ever prominent. Murakami’s own work aside, he is also known as a translator for English language fiction, having been credited as the modern translator of two of Fitzgerald’s works into Japanese (The Great Gatsby and My lost City) ten of Chris Van Allsburg’s books (including the Polar Express) and seventeen other English speaking authors. In connection to this Murakami mentions many English speaking authors in his books, especially ones he has translated himself, as is the case in Norwegian Wood, where Watanabe and Nagasawa bond over their love for The Great Gatsby where no one else in their college has even picked up a book by an American author. Tamura changes his first name to ‘Kafka’ while on the run after being influenced by Franz Kafka’s works. During his journey he settles in a library where he reads up on Russian and German History for fun. Also, within ‘Kafka on the Shore’ ‘The concept’ or alternatively two misleading people trick the travelers Nakata and Hoshino by making them do things they don’t want to do while taking the forms of Johnnie Walker and Colonel Sanders. ‘Colonel Sanders’ says “I wanted to take the form of Mickey Mouse, but that would be infringing copyright.” Once again comparing Murakami to Natsume Soseki’s ‘I am a Cat’, both authors have a strong theme of Japan being influenced by Western culture, but because of the time period they are writing it their opinions couldn’t be more different. Soseki wrote ‘I am a Cat’ in the 1910’s, where Japan has only recently opened itself up to the world again and allowed international trade to settle in their ports. Because of this, one could say that both the Japanese and the Americans who mostly traded with them had a culture shock whenever they saw each other, causing a direct split between the populations of those fascinated and those fearful. Soseki took his fear and turned it into a political satire. Murakami was born four years after the Second World War, and thus was a teenager in his prime in the 60’s. In those collection of decades between the writing of ‘I am a Cat’ and Murakami’s first novel ‘Hear the Wind Sing’ in 1979 the world and Japan had changed dramatically, so dramatically in fact that whenever the two authors wrote a satirical ‘screw you government’ scene in their books they were for completely polar-opposite reasons.

In short, Haruki Murakami is one of those authors who loves to bring in recurring themes and make you think agonizingly over them. On the subject of ‘Kafka on the Shore’, Murakami says “the secret to understanding the novel lies in reading it multiple times: “Kafka on the Shore contains several riddles, but there aren’t any solutions provided. Instead, several of these riddles combine, and through their interaction the possibility of a solution takes shape. And the form this solution takes will be different for each reader. To put it another way, the riddles function as part of the solution. It’s hard to explain, but that’s the kind of novel I set out to write”. Having only read Kafka on the Shore once, I feel obligated to read it once more as admittedly I think most of the riddles he talks about went over my head first time around. As I continue to read his books and play Murakami Bingo as I go along, some on the themes become clearer, others lose their magic, and new ones pop up all over the place. There are many more I could have talked about here, but the list is far too long. To conclude though, I will list some so maybe you could have your own game of Murakami bingo: 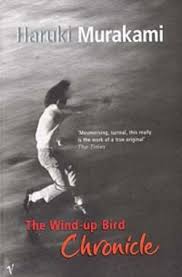